give you an endless goal of collecting debilitating, yet highly valuable blobs that increase your score exponentially while being fired at by relentless rolls royce lasers

in unity with a node backend

to make sure a simple idea didn't get much more complicated. for instance, we were going to have the main character change shape depending on the shape of the blobs you collided with such that the vertices of the colliding blobs would approximate to the vertices of the player blob conglomerate. we dialed it back when we realized we only had another 6 hours to go and none of us worked for CERN.

getting as close as we did to implementing most of the complex features we envisioned while running stable most of the time.

the greatest thing about a simple idea is you can avoid the nightmares you have after the idea meeting if you decided to implement GTA in space. being a katamari chased by laser firing rolls royce cars is absolutely hilarious to watch and despite its simplicity, is still a challenge to implement in a short time. 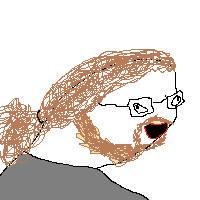