Many performance cars have acrylic engine covers to allow people to see the powerful engine under the hood. Similarly, many gaming PC cases come with a side window, and more often than not an LED strip to illuminate the components of the computer. We think that's great, but we wanted to improve upon it.

The light strips are plugged into a computer, so why not be able to control it via the computer rather than a remote, or buttons as so many others have? Our software allows you to create plugins (or use the built in plugins) which will react to music, temperatures, fan speeds, notifications, and whatever else you can think of. Plugins are meant to be extremely easy to create. They are written in JavaScript and placed in the users' Documents folder.

There are several parts to the program:

Many of these steps were done in Node.js natively or with node modules. The program looks for and loads a plugin, (either based on preferences or a default) then sends an array of values over serial to the Arduino, which uses the Fast_SPI library to communicate with a series of LPD6803 chips on the RGB LED strip.

We plan to keep this open source, up to date, and easy to use for the pc gaming community. 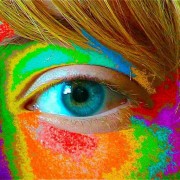