The model house was cut by laser and then modified with power tools to facilitate four lights and two servos. A prototype circuit board was soldered to provide resistance to the LEDs, supply external power to the servos, and provide a common ground.

The project was prototyped with an Arduino Uno (Rev 3) with a Seed Studio Ethernet Shield (v2). It has since been updated to an Arduino Yún which includes onboard WiFi.

The Arduino is powered by a USB battery pack and gets internet from a WiFi hotspot. The servos are powered by four AA batteries, making it possible for the entire project to operate completely wireless.

When the model house connects to the internet, it opens a connection to PubNub and begins waiting for messages. When someone taps "Open Garage" on their phone, their phone signals PubNub and PubNub tells the house to open the garage door.

Made by Ian Jennings at ATX Hackerspace in Austin, TX. Powered by PubNub. 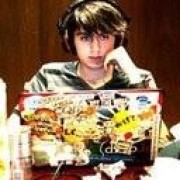