We wanted to provide some medium through which people with communication disorders could indicate their emotions and have fun doing it.

Fuck Spotify, fuck Microsoft, fuck Android. That is all. 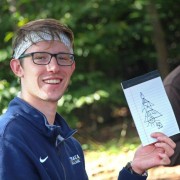