The inspiration comes from the recent increase of crime related activities in and around Houston. Even those small ones we have faced in RICE or my friends at University of Houston. This app is built to provide a near realtime crowdsourced crime reporting as well as Incident Reporting Tool where we all collaboratively can contribute to keep our city safe as well as help others in need when required.

It is a web app (also mobile via cordova packaging) which users can access from any internet enabled phone. They will be able to view a news feed which will have a list of all the incidents in order of time. And also they will have a map view through which they can see who reported them, a small picture of them so that they can be identified and what they reported. There is not other personally identifiable information out there. In the map view if someone wants to report something they will just click on the report button and it will show them the crisis/incident type and what they want to report.

They also have a option to "broadcast" their emergency. Which will open a video chat in their phone which other can will be able to see in the app main page.

A login/registration is not necessary for viewing the incidents. But is necessary to report one.

The rough userflow is as below

In short. Google+stackoverflow+meteor and mongodb documentation. And of course with the help of super friendly @dmwilson

See the attached presentation. But in short

PS: The github is not updated. Its 9~10 hours stale code. And you know what that means for a hacktahon project... 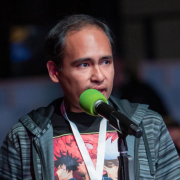