Key screens are a common video special effect. However they typically require a specially colored green screen for a background, and frequently the green color bleeds into the image.

HeatKey uses the FLIR One's IR camera to detect people standing in front of a cool surface (for example, almost any wall that isn't on fire). It generates a mask that is then used to drop people into an arbitrary scene.

HeatKey is based on OpenCV and the CVFunhouse computer vision framework for iOS. 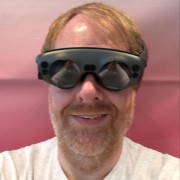