Want to meet interesting people? Tired of living in a boring consensus bubble? Get matched with someone with opposing views but similar interests and get the conversation flowing

With HackRoulette, we’ve developed a smart anonymous chat platform catered to the smart modern user. HackRoulette re-imagines the way we connect online by pulling your Twitter feed through Indicos artificial intelligence API to discover your interests and political affiliation. We present to you your top interests then pair you with someone with similar interests but opposing viewpoints, give you fun fake aliases, and throw you in a chat-room with random prompts on controversial current issues. Engage in heated intellectual discourse with an opposing interlocutor on HackRoulette!

Discover who you are, debate about what you believe in, and see from new perspectives. Let the fun ensue!

tl;dr Chatroulette with ml, pairs you up with people with similar interests and different political views

We'd like to thank the Linode dude, Penny, for helping us fix our deployed application without knowledge of our IP address, or a password or account name, in record time, with nothing but access to a mac console. 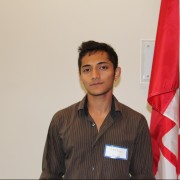