A 2D space dogfighter with a fun little twist, we were going to try and implement some effects of general relativity by scaling up the players view as they approach a planet. Thus keeping the local speed for the player the same while slowing down the player relative other players. Plus some other affects of gravityh such as bullet curving etc.

Nothing much at the moment, a placeholder png of the master sword flies around the screen shooting lasers. Which we guess is kinda cool.

With caffeine, food and sadness.

None of us knew unity, which was a fairly big hurdle as we ended up having to find tutorials to learn off of that were concise enough to complete in an hour.

Getting a sprite to draw on a background! 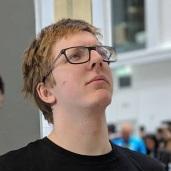