With the recent events happening in Hong Kong and everywhere else in the world, we came to realize that a reliable channel of news would make people organized and stronger, whereas censorship and misinformation could only encourage violence, hatred, stereotypes and ignorance.

People are looking for a channel to voice their opinions without the fear of exposing their identity or causing political implications. It is our belief that such means of communications would better connect the people with a love of freedom, and it will hopefully be the catalyst for the next social movement.

The GrapeVine is an anonymous peer-to-peer social network based on the Bluetooth Low Energy (BLE) technology. Posts would propagate between devices in a decentralized fashion, and they would expire after a set number of hops (TTL). After receiving a post, the data would be save locally on the phone, and once the user moves to a new location, the post could be spread to a new group of devices. Users could "upvote" a post to increase its TTL and thus help it to be spread to a more remote location.

Our app was built with Android Studio, Kotlin, Java, and JavaScript. A simple decentralized database was constructed to facilitate the movement of information between devices over a BLE-based network.

Getting Bluetooth to work was hard. A lack of experience caused us to choose the regular edition of Bluetooth initially, which requires pairing to work.

However, the biggest challenge we had was maintaining the data integrity on the decentralized network. We had to use caution to prevent data duplication as a result of receiving the same information from multiple devices. Together with TTL, it prevented the recursive propagation of posts.

We are proud of constructing this BLE-based forum as a proof of concept of a decentralized social network.

We learned a great deal about managing device connections and messaging without the Internet.

What's next for GrapeVine

With the fundamental functionality been implemented on MHacks, there are still a lot more could be done.
Security issue also needs to be addressed, since government agents could flood the network by creating a large number of spam posts. We're thinking about a block-chain based network to provide encrypted messaging between devices. We're hoping that our work could have an impact on the society and become the catalyst in the next social movement 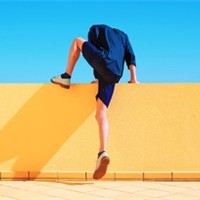