I was locked out of WeWork when I went outside to capture more 3D geometries using a project tango tablet. When I found someone to unlock the elevator to come back, I accidentally started 3D capturing on the tablet - and the result was amazing since the tablet generated a map with the ground and 4th floor stitched as if they are in the same floor. Then I started to experiment and find "glitches" while capturing 3D models.

The glitches I tested was:

The experiment was mostly done on the Tango tablet, but some coding was involved, for example, controlling the color filter by a Javascript app for iPhone, and visualizing the resulting 3D model using OpenGL.

The reconstruction app is made by Google and is clever enough to reduce noises and eliminate foreground objects (e.g., human) from the 3D model. So I had to experiment what objects are suitable to introduce glitches, and how to move the tablet to produce glitches.

Some results are not just interesting but has aesthetics.

Project Tango is not perfect.

What's next for Glitch 3D 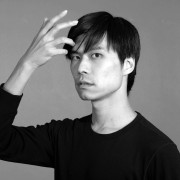