We've been gaining some weight lately, and we wondered, what are we missing? Probably some six pack abs. But most importantly some inspiration to eat healthy. So, we thought let's build an app which will motivate us to get back in shape and stay fit. Competition has always been a factor of motivation, so we thought how about we create a small competition between your friends for the race of being the fittest. So, we brainstormed our pea-sized brains and came up with Foodifai. The rest they say is history.

It's an app, which helps you stay in shape by allowing you yo take a picture of your food, and depending on it's nutritional value, assigns some points to you. There are also groups, where you can compete with your friends and family, to gain the top spot. The more unhealthy food you eat, the more points you lose. It's also equipped with a cool trash talk feature, which intimidates you, when you try to eat unhealthy food.

We built a native Android app, which uses Clarifai APIs for image tagging. We've also used Parse to implement the Login and Register functionality along with the storing the data for leaderboard and groups.

A lot of them. We ran into an issue where we were not able call Clarifai's API, because of some incorrect Exception logging. Initially we ran into some problems connecting the application to Parse. This was happening because we had incorrectly initialized Parse. Then we ran into some issues regarding setting the Read and Write settings of the ACL settings, after we overcame those we were good with Parse.

Apart from the issues faced above, one of the biggest concern was data analysis, which in turn came up as a major challenge, however, we were able to overcome the same to a large extent.

-Currently we have mocked nutrition data, however, we look forward to connecting the application to more authentic nutrition data from sources like NSDA API, Food API etc. 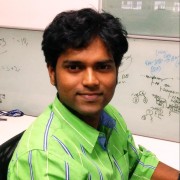