We love Tinder and what it has done for social media, so we took an objective look on what it did well and what it didn't. Tinder is great for quickly meeting new people, however, we felt like it lacked in doing one thing. Making organic relationships.

Our system takes a new spin on an old system. Flint (name coming from Flint and Tinder) revolutionizes the dating scene by slowing down dating to bring back the flair and appeal of slowly getting to know another person. We built a web application that leverages the Facebook API to match you with other people near you, and quickly puts you both into a conversation. However one of the important aspects of Flint is that we put you in a new situation where you don't see the other person's face first, but their personality.

At first, everything is a completely blank slate, and you are presented with a text conversation, similar to real life. However, as you interact more with each other, information about one another is slowly revealed.

First just their name. Then comes a few TV shows they like.

Later a module appears showing you what languages they speak.

Our project relies on Facebook API, GoInstant, GoAngular, IsaaCloud, Node.js, Angular.js, and jQuery. These technologies allow us to provide realtime feedback and interaction to our users.

We appreciate you checking out our hack project! We look forward to demonstrating to you in person. 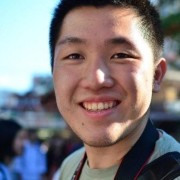