What Our Team Learned

What's next for Financial Ethics Propagator 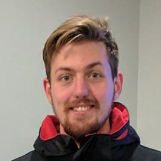