A hardware hack designed to allow a safe, interactive stimming experience for both autistic and allistic individuals.

Created at HackMIT 2016 by Kathleen Burkhardt and Jeremy Hong

Self-stimulatory behavior, also known as stimming and self-stimulation, is the repetition of physical movements, sounds, or repetitive movement of objects common in individuals with developmental disabilities, but most prevalent in people with autistic spectrum disorders. It is considered a way in which autistic people calm and stimulate themselves. Therapists view this behavior as a protective response to being overly sensitive to stimuli, with which the individual blocks less predictable environmental stimuli. Sensory processing disorder is also given as a reason by some therapists for the condition. Another theory is that stimming is a way to relieve anxiety, and other emotions.

This project was built to show that stimming is a natural and calming experience.

To set up your own FidgetWidget, you will need:

Once the circuit is assembled, run the code on the Arduino and the Raspberry Pi. 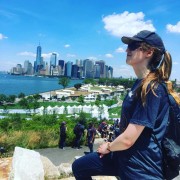