The origina farmaid bot was made in response to the Arm Autonomous Robot Challange and was the winner in two categories, Best Use of AI and Most Fun Social Media Video. It is a robot that can detect diseases in plants to allow early detection and disease mitigation. The details can be found here https://www.hackster.io/teamato/farmaid-plant-disease-detection-robot-55eeb1 The original idea was inspired by one of the earliest videos on the tensorflow youtube channel here:

The problems with the product described in the video was that it can be too time consuming for someone to actually walk the entire farm with such a phone. Additionally, it would either require a cloud connection to detect the diease, meaning an internet connection in the field is required the other option is to have a phone phone powerful enough to run Tensorflow Lite models and the model should work uniformly on every type of phone. To fix these issues, a simple solution is to have a standardized and cheap mobile computing platform that can run autonomously in the field and use tensorflow or tensorflow lite models to detect diseases.

The version described here is a complete overhaul of the original bot using Tensorflow 2.0, ROS and Arduino made in response to the #PoweredByTF 2.0 Challenge.

I modified some code from https://github.com/zzh8829/yolov3-tf2 (wihch is under MIT license) and added it to my fork of the repo here: https://github.com/arifsohaib/yolov3-tf2 This code is a port of YOLO object detection. The reason to use Yolo instead of the Tensorflow Object Detection API is that the Object Detection API uses tensorflow slim which is deprecated in tensorflow 2.0
We collected our own dataset from videos at the WTMC greenhouse in Ann Arbor and labeled the data using Microsoft VOTT tool.
The labeled data was then exported to tfrecord format to train the model.
Currently the code can only use 80 classes and needs to be fixed to take a variable number of classes from the .names file. CHanging this by adding a num_classes flag caused other issues with the size of the output
It also has an issue with training on multiple tfrecord files where it always returns nan values after 1 or 2 iterations
The original repo also had some issues with the video output which I have fixed
Dispite the above, when using a single tfrecord file for training, and without modifying anything else, the retraining instructions from the original repo works and the results can be seen in our video
*Labeling the diseases using VOTT

The robotic platform is run using Robot Operating System to communicate between components. The Arudino code for the bot was written by Victor Yu and can be found here: https://github.com/victory118/farmaid_bot/tree/master/robot_launch
This code contains ROS launch files to launch the various components used by the robot.
The main required node is the tele_op node which can be used to operate the robot.
Another important node is the usb_camera node which publishes camera output.
The fiducal node which detects Aruco markers that allow the robot to build a map. Additionally, it can allow the robot to navigate autonomusly without training a neural network which is feature we plan to add later.
This map will later be combined with a node that publishes the output of the tensorflow detections and the data can be combined to get a clear picture of diseases in the farm or greenhouse environment.
We are also considering point cloud based navigation powered by the Intel RealSense camera. 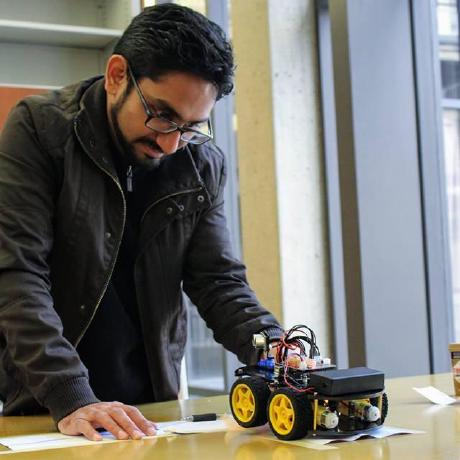