Traffic lights are not as responsive to motor and foot traffic as they could be, and they certainly don't account for vehicle emissions when changing light timing. Using video analytics, we propose to minimize vehicle emissions by optimizing light timing based upon average speed and vehicle count. We also propose to account for special conditions, such as outliers in foot traffic conditions, to allow for large crowds to traverse a major intersection safely.

CityIQ data includes sequential still images captured at 20 second intervals. Using image analytics, we determine the count of vehicles and their average speed in each direction within the intersection. Using estimates of motor vehicle emissions at idle and at speed, we calculate the current emissions being generated by each route of motor vehicle traffic, and attempt to minimize the overall idle time. If, for example, traffic along a main route were flowing, and few or no vehicles were present in the cross-street, then the traffic lights might maintain the flow of traffic on the main route for an extended period of time, allowing for an absolute upper time threshold. Using a different but similar algorithm, foot traffic could be analyzed and the traffic lights could be periodically optimized to allow for the safe movement of larger crowds of people.

The work of analyzing and optimizing light timing is performed by analytics in the Predix platform, utilizing image data captured by GE CityIQ Intelligent Nodes. A web application displays the total carbon emissions that have been reduced using the optimized timing, and could be extended to allow an administrator to apply or disengage the algorithm across the traffic light control space. It could also allow for changes to the upper threshold for maximum light timing.

We accessed CityIQ image data, and leveraged image analytics that determine the count of vehicles and their average speeds in each direction of traffic. We built analytics to aggregate and compare the traffic, and a control API that could be used to change traffic light timing. Finally, we built a UI that displays the saved emissions, and could be extended in the future to include a range of related functionality.

The data is not actual, but modeled, and includes some unrealistic vehicle behavior, which made it difficult to demonstrate rational results. We did still manage to build a reasonable rule-set. We would have to solve the problem of extending a control API into the traffic control system, which would have to be built with the highest degree of security.

We feel this is a unique utilization of CityIQ data, and it could realistically contribute to minimizing traffic emissions. If the rate of image capture were increased, the analytics could prove more useful. A number of other optimizations could be added, such as including or excluding specific fields-of-view, or allowing for emergency vehicle overrides. A particularly interesting future improvement could be to analyze the type of traffic, and to account for emissions by vehicle type and occupant capacity. For example, a large truck at idle would generate higher average emissions than a hybrid-electric car, and a fully electric vehicle could be discounted entirely. Vehicles waiting in turn lanes could be ignored, because they would falsely reduce the "average vehicle speed" calculated for that direction of traffic flow.

We learned about the CityIQ data set, and about rapid Predix application development. We feel there is real value in this idea, and are proud of our contribution to the GE Minds & Machines Appathon.

What's next for Evergreen

A number of improvements, suggested above, could be added. If the image capture rate were increased, we believe the algorithm could prove more useful. 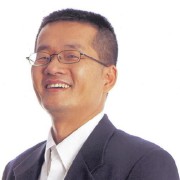 All traffic and pedestrian information captured by two chosen assets are now ingested Postgres for consumption.

I've downloaded all the images taken by two camera for the past week; and programmatically added asset id and timestamp to the images.