We have wanted to create an electric longboard that was controlled via bluetooth for almost a year. However, we kept on running into barriers and we never had time to create the app.

The app we created allows us to control the variable speed motor while riding the board.

Mit app inventor was used to create the software for the android app. An arduino coupled with a bluetooth antenna was used to communicate with the board.

We had some difficulty with the wiring of the speed controller and aduino but after several troubleshoots, we got it working.

We think it's super cool to have made an electric longboard from a drop deck type as it has never been done before due to its low ground clearance. This makes it difficult to have enough room for the motor assembly and battery.

What's next for Electric Longboard

Finding a better way to contain the hardware on the longboard. We have a few 3d printed prototype cases we are working on improving. 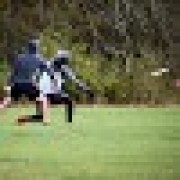