We are developing a competitive platforming game that takes place on a downhill slope. You and your opponent can shoot high-velocity grenades, that shove you off the screen - and if you fall off the screen, you die! However, you can also detonate the grenades (or wait 2 seconds to let them detonate) and they'll turn into a time-slow-down field. On top of this, an avalanche of grenades are falling from uphill behind you, making the battle never the same twice. It's designed to be competitive but easy to pick up, intuitive but easy to master, and bring back the fun of local multiplayer that is so often lost in modern games. We were inspired by games like Speedrunners and Braid and Super Smash Bros, and we hope that new and old players alike will find themselves enjoying Downskilling!

NOTE: YOU NEED AN XBOX 360 CONTROLLER, ON WINDOWS, TO RUN THIS GAME. IT IS NOT OPTIMIZED FOR KEYBOARD INPUT OR MAC OR LINUX. 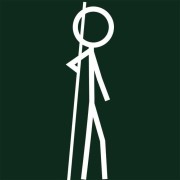