There's a time after every event, be it a a concert, a hackathon, a late night meetup with friends... where a high number of the people involved start asking each other for the pictures they took. This usually goes on for a few days, or even more. Wouldn't it be great if all of the photos everyone took would be instantly shared among everyone, for them to enjoy even right after they were taken?

It uploads every photo taken with the app to a server. Photos are linked to the event at which they were taken so everyone in that event can browse through the photos and download a high-res version of any of them.

We use NodeJS for the backend, which handles the creation of groups as well as uploading the photos to an S3 bucket and serving them via an API.

None of us had never used NodeJS before, and we had little to none experience coding for Android, so development was slow and filled with bugs.

We learned how to work with NodeJS, Android and AWS, and how to make them talk to each other.

What's next for Djinn

There are many ways to improve the app, including but not limited to opening apps in high-res, private groups and events, user login, caching pictures... 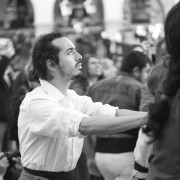