The frequency and severity of natural disasters are increasing at alarming rates each year. Roughly 6,800 natural disasters take place every year, affecting 218 million people worldwide. Wildfires, floods, earthquakes, drought, tornados, hurricanes, and other natural disasters pose a serious threat to humanity, claiming upwards of 68,000 lives per year. For those affected, finding a route to safety can be difficult without real-time analysis of the situation and damaged area; and for those not affected, there is no clear way to help others in need.

In response to the challenge these disasters present, we present Disaster Atlas, an engaging disaster-preparedness, response, and recovery app to inform users about natural disasters occurring both locally and globally, help them locate safety zones away from blocked areas using state-of-the-art ML models, and spark action by encouraging and facilitating donations to help for those affected by the outcome of these disasters.

How might we leverage Machine Learning and Cloud Architecture on AWS to accelerate disaster awareness to help identify and guide users toward optimal safety routes so that we can improve response and recovery efforts while reducing adverse outcomes in the event of a natural disaster?

In alignment with the AWS belief that technology has the power to solve the world’s most pressing issues, Disaster Atlas was created to explore ways in which Machine Learning can be applied to solve pressing challenges in natural disaster preparedness and response while also delivering social impact.

At the start of the challenge, research was compiled gathering information and insights from datasets and academic resources to understand and recognize where ML could perform the greatest good. Together, our team used Miro to brainstorm solutions focusing on areas where our collective interests and skillsets aligned and what areas we could explore to create an engaging and impactful solution. 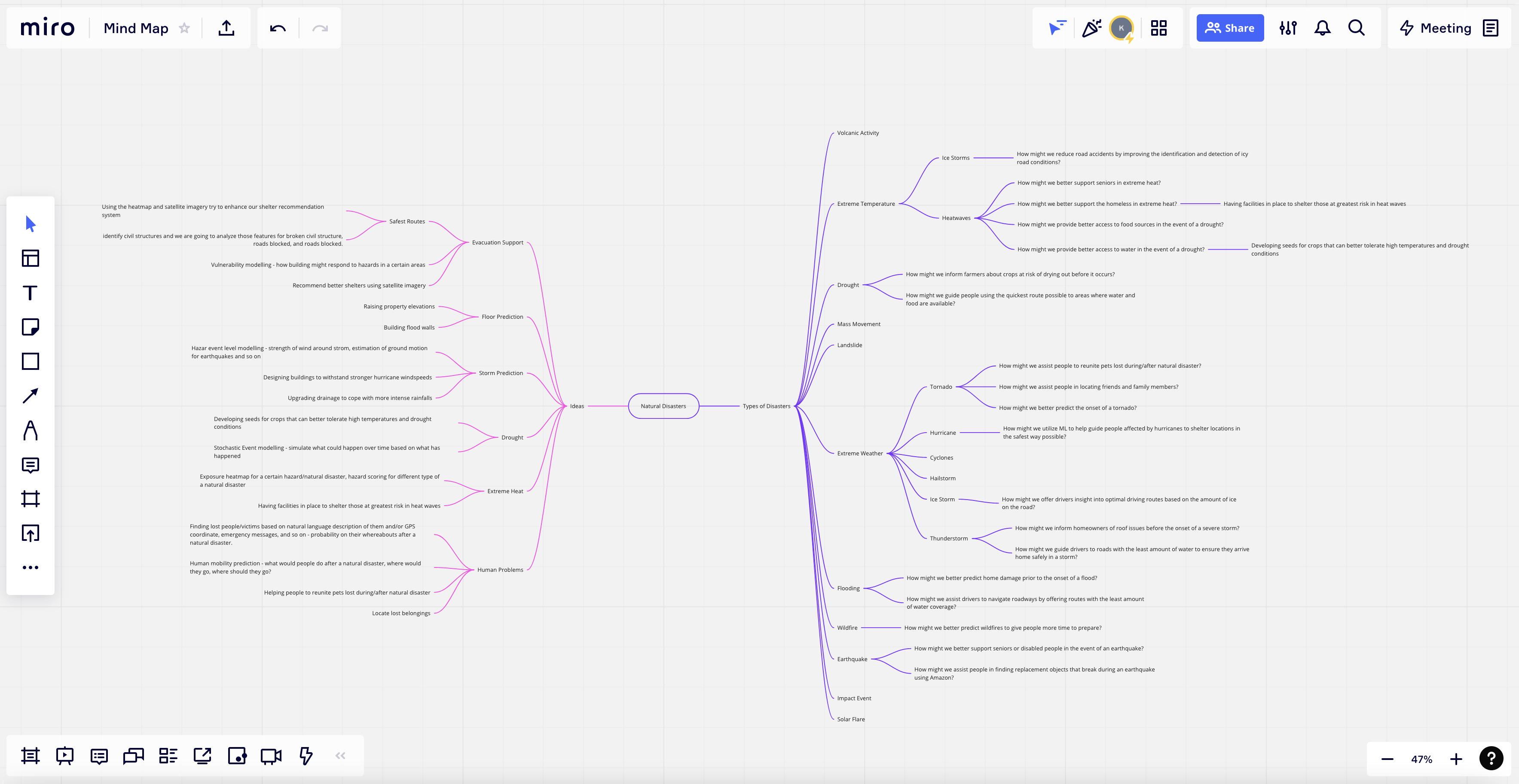 Disaster Atlas is a mobile iOS app designed to:

The app utilizes satellite and aerial drone technology to gather and synthesize graphical data to determine optimal safety routes and shelter locations in the event of a natural disaster. Safety zones are presented to users to safely guide them towards government-designated shelter locations.

Taking UX cues from the popular app, Citizen, combined with the Google Maps interface, Disaster Atlas has been designed to ensure users and organizations with limited technology and Machine Learning knowledge can access this tool with few barriers and learning curves. The app focuses on delivering engaging content to earn and appeal to audiences worldwide while building and fostering a community-driven environment. The app also promotes disaster-awareness impact, utilizes the power of a mass audience to immediately notify users of impending danger in the event of a natural disaster, and presents users with the most trusted routes to seek shelter if necessary. Disaster Atlas also considers how additional Amazon services can be used to help people and communities impacted by natural disasters by facilitating donations using Amazon Pay.

Disaster Atlas is a simple platform built around the model we trained in Sagemaker Studio Lab and using open-source software, open datasets, APIs, and various services from AWS’s portfolio, including Amplify, S3, EC2, and Cloudfront, DynamoDB all of which are used to empower and deploy our application to offer optimal routes to safety. Further, Disaster Atlas leverages Amazon Pay to facilitate payments from both users and organizations to support people in need during a natural disaster.

Disclaimer: The parts with dotted lines were not built in the end because we ran out of time. However, this has been scheduled for future iterations of our project. 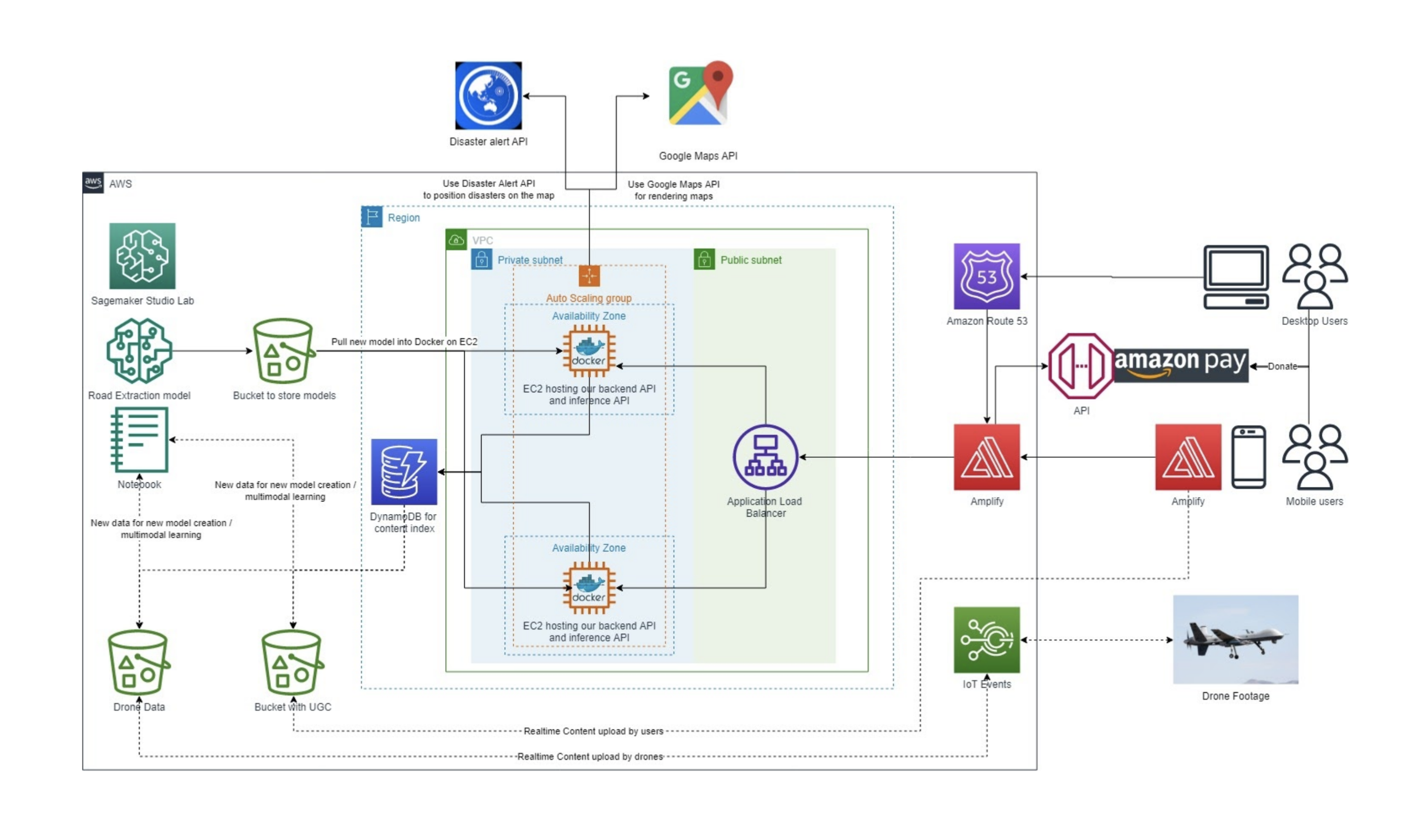 Beyond the value of the ML component alone, Disaster Atlas is a scalable product that has been created to build audiences around a social media model, as well as integrate Amazon Pay to send and receive monetary donations. Currently, the app demonstrates the use of Amazon Pay alone; however, later iterations would see the app offer users the option to create Amazon Wish Lists if emergency supplies such as diapers, clothing, or food are required, or possibly the option to utilize Amazon Smile, extending the opportunities available to make a deeper impact.

In addition to the business value Disaster Atlas has the potential to offer, our team has also looked at and learned from existing state-of-the-art Machine Learning techniques to enhance our model’s accuracy at isolating damaged civil infrastructure but have also figured out a way to integrate that into a usable product, which an end to end workflow has been build for, with both backend and frontend on a mobile app. We combined the power of machine learning with the cloud services that AWS offers and harvested that to build a useful product for anyone who could be in need.

The system works in the following way:

We used Sagemaker Studio lab to:

Kori: As a UX designer who is new to learning about ML technology, this has been a great learning opportunity to understand the capabilities of the technology and how to design with ML capabilities in mind.

Matt: Together with Shri, I set up the Native app to be built with React Native and Expo, leveraging AWS Amplify. I also built the initial authentication flow using AWS Amplify, and the UI for the social elements, including a TikTok-like video browser.

Shri: Together with Matt, I worked on the boilerplate code for the repo and built the login, sign-up, forgot-password using Amplify and video upload to S3 in the alpha version of the app. In the beta version, I built the Disaster Atlas map that shows disasters both locally and globally and shows congregation areas and safe routes around damaged areas. I also built several features like disaster cards, search-and-navigate-to-disaster on the globe, drawing damaged routes using GeoJSON, geofencing around disaster areas, safe waypoints, different terrain views, and 3D modes on the map.

Romeo: Learned a tremendous amount about the impacts of natural disasters and the different phases of disaster management and response. Designed our solution’s architecture and data flow. Read a ton of research papers about the use of ML for disaster response and experimented on the road extraction model and what would be the best way to build an inference API.

Jason: I’m a seasoned AI researcher, but this type of problem was something I never really gave much thought to. Today, my worldview around using AI to help aid us in our fight during natural disasters has changed completely as --despite being in the AI field for quite some time -- I was unsure of the real impact AI could have in disaster preparedness and response. Also, met some wonderful people and made amazing friends. 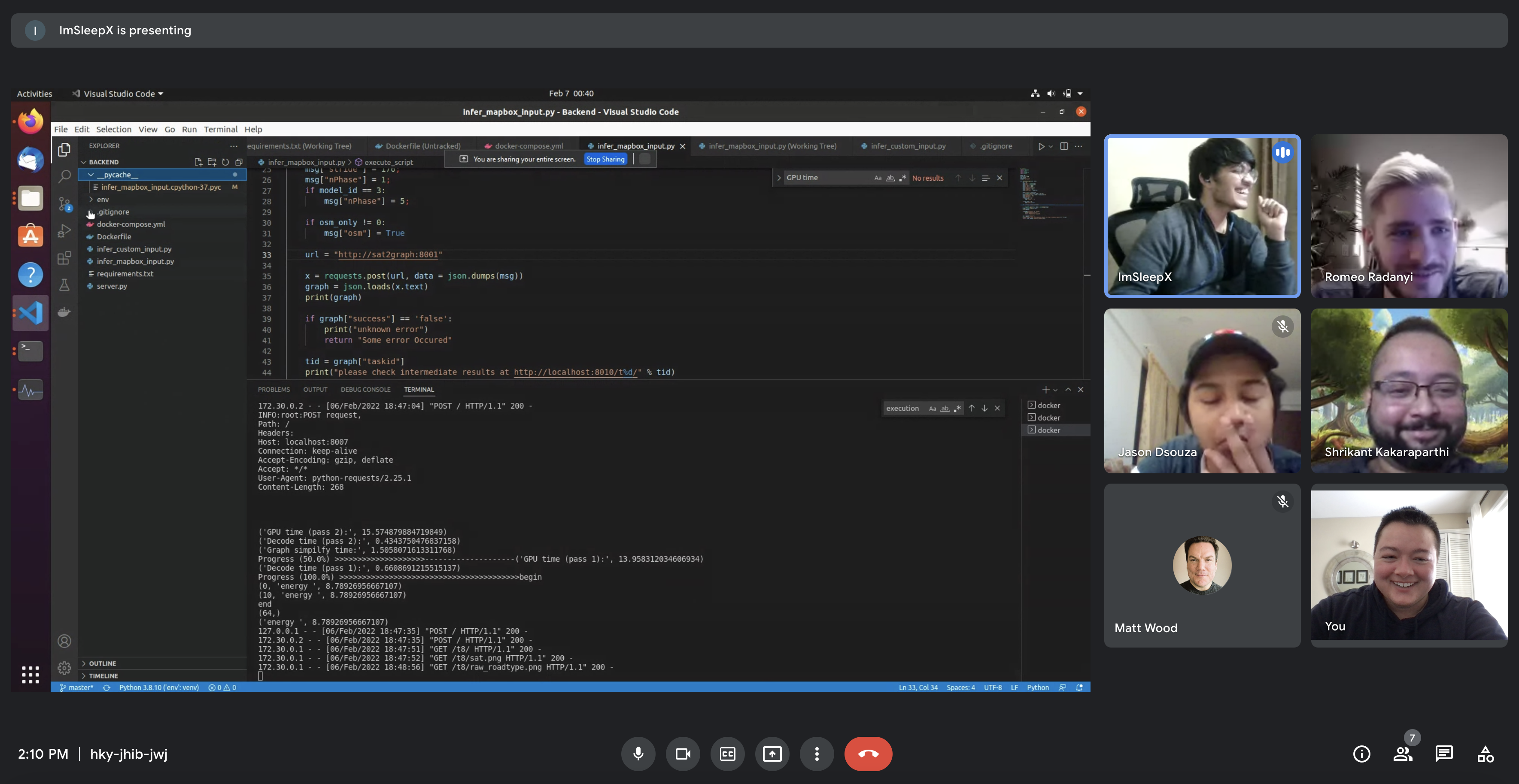 We believe there is a lot of improvement for our app. Further iterations would include several new features, including: