At the beginning we had a general sense of what we wanted to do and spent 2-3 hours to do all of the wireframing and UI/feature design. When we decided on a final build, we split into iOS and Android teams of two so that we could make the app for both platforms. The developers of the iOS app, Tom Strissel and Randall Spence, have had some experience with programming apps before, so Kyle Holzinger and Mark Benilov, neither of which had any experience, worked on the Android version. All of us have had experience in object oriented programming, in languages such as Python, Java, Obj-C, etc. so it was an interesting experience learning a new type of software development as opposed to the problem sets we are so used to.

In terms of expanding the app, we implemented it just shy of actual P2P sharing, so the next logical step in its development would be to distribute it on a large scale. We would definitely like to be considered for for the "best n00b" award, considering only one of us had any experience programming applications, and none of us had gone to a hackathon before. We truly enjoyed the experience and we all feel that we gained a lot from the past 24 hours. Can't wait until the next one!

Since we made two apps, here are the links to demos of both the Android and iOS versions: 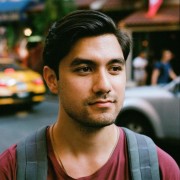