it is 2016 and it is odd that we still design 3D objects on 2D interfaces - pen and paper, laptop screens etc. We think that users will be better designers and creators if they could intuitively do so i.e. draw 3D objects in 3D space.

We built daiso Kinect for this. The entire structure (save for the sensors which we borrowed for the event) cost less than S$20. Unlike the Kinect which is expensive and uses a high powered camera, we ditched the camera and used ultrasonic sensing and good ol' math to interpret 3D motion into a visualization.

The current prototype can do a few things - draw wire frames (like the real life 3D doodler pen), extrude on existing paths, and view drawn designs in VR. All the mechanisms were executed using a fantastic contraption made of cupcake covers, yarn, curtain hooks and dustpans. 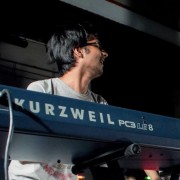