Sub-Saharan Africa is subject to many difficult conditions. Monsoon weather creates mist, arid climates mean sparse communities and low connectivity, and a low economic development means that the entire economy and community must rely on cattle and agriculture – both for resources and to make small profits.

We have a lot of data on Africa for many aspects economic and cultural, but production of food is where we begin to wane. Such data would be extremely useful for research and philanthropic efforts, ensuring time and effort goes to where it is needed, but also to predict patterns in cattle health, diagnosing potential problems in real-time. We think we've designed an idea that can help here, with a little bit more.

Our idea, the Cattle Ontology Web, hopes to empower both farms and herds, offering both a useful stream of data to philanthropist organisations but also to the farmers themselves. We are collecting two streams of information – vitals on cattle, but also data for soil, as the two can be quite interdependent.

The C.O.W. is comprised of two major parts. The Sensor Spike is static, whereas the Vital Sensor is strapped to the cattle itself.

Handling communication and computation is the Sensor Spike. It is a four-metre spike, telescopically extending from a more portable 1.5-metre design, containing many useful sensors designed to be inserted into the ground, gathering soil information. This provides stability for the top end to gather weather data, and contain a rather useful camera.

If a farmer or herder wishes to move this Sensor Spike about, they may do so: the low-bandwidth LoRa ensures we are sending only as much anonymised data as would be actually useful. The camera could provide local CCTV data if needed – but this is not its only purpose.

Our trusty camera, be it visible or infrared, sees many LEDs in a farm – each cattle holding a very small, battery-sized solar cell powering temperature and heartbeat sensor. At the end of each day, when the sun has set, this low-power unit powers up an LED is detectable by a camera – so it flashes at a low frequency, transmitting its power to a small camera at the top of the Sensor Spike.

Naturally, a farm could contain many cheap Sensor Spikes. With the low-throughput LoRa technology reaching up to 100km, however, we can ensure farms need no wiring, simply solar power at each spike. The low throughput also guarantees privacy – images are only analysed, as sending them en-masse would require a lot more power.

How, then, do we communicate these data back to a home base? We thought of two useful approaches. Researchers in South America have built static-facing Wi-Fi antennas spanning 26 kilometres. This would not only allow us to send our low amount of data, but also receive any analytical data produced to help out farmers. It goes without saying that this would also provide the Internet to a community that would need it.

If this is not viable, and contemporary communications (3G, even SMS with good data compression) are not viable in a region, perhaps we can find help in more nomadic herds. Using a specialised, telescopic sensor spike, this portable design could be useful both for giving quick data on cattle health and useful both as a data courier and to help herders gather data while building a good map of soil quality on the ground.

How did you do all that in three days?

Well, we didn't entirely build all that – it’s a little difficult to find cows, probes and sensors! Our proof of concept merely implements the most exciting part - bit-level communication with simple LEDs using OpenCV.

As both our camera and LED should be cheap and rugged, our ideal time to communicate data is at night. This also guarantees nomadic herds aren't moving, and allows the data to potentially be used for security functions, too. At the moment, we can encode a simple log of temperature into a stream of bits. Given a standard 30fps camera, we can put out about 20 bits per second, which could transmit a day's data in less than half a minute – useful as the camera sweeps about the herd or farm.

Cost and power consumption of designs was a issue given the constraints of Sub-Saharan Africa, as was ease of use. We believe that the sensor-spike design has a sufficiently straightforward UI – you just stick it in the ground – but has not been tested with real users. The main impetus behind LED transmission from the cattle was driven by the need to find a solution for a sensor for each cow in the herd, while minimising the power and equipment cost of transmission of the data to a central hub. We investigated active RFID tasks but since they use high-frequency radio to transmit the information, do not have a long battery life and also are significantly more expensive than is feasible for Sub-Saharan Africa. Our LED concept, on the other hand, uses only cheap LEDs as a means of transmission and is thus much more affordable and uses much less power.

Technical challenges include the difficulty of actually localising distant flashing LEDs against random stray noise in the background, especially bright backgrounds. Additionally, synchronising the camera frame rate to the frequency of the LEDs for optimal bit transmission is a real challenge and devising encoding and decoding schemes for the data.  The relatively poor camera quality and inconsistent framerate of the webcam used to localise the LEDs also was an issue in decoding. Other technical challenges

We learnt about the importance of low cost and robust solutions for sub-saharan africa, and the challenge of designing IoT solutions under these constraints and also without ubiquitous connectivity. 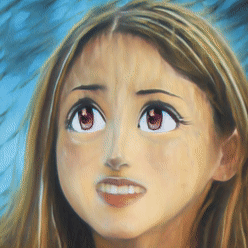