Contact is an interactive dance floor, that reacts to touch and steps. It lights up based on touch. There are some interactive games, like Twister and Pong, that can be played on Contact as well. It is controlled via the Nexpaq app, on a phone or other device with the Nexpaq app.

We built a capacitive touch sensor using RC circuits. Then we hooked up a string of LEDs and figured out how to program with them. We built the housing and hardware necessary for the dance floor to be able to withstand weight. Simultaneously, we were exploring the Nexpaq system, to understand it and figure out how we could incorporate that with the rest of our hardware to use it as a remote, controlling what minigame is on the dance floor.

The wood housing was difficult to build, as the glue would not hold very well and the pieces weren't quite exact sizing. Since there were so many tiles on the dance floor, each of which needed its own capacitive touch sensor, we needed to use multiple Arduinos instead of just one, which became quite complicated.

We learned a lot about: 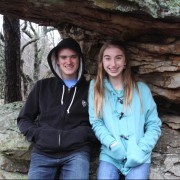