I was really excited when I heard that Viacom's was going to be available during YHacks this year, because I am incredibly passionate about the entertainment industry and I wanted to create something new & awesome that Viacom would really enjoy.

From this, I have used their API to create a web application that randomly generates a custom t-shirt (using thumbnail images and text) from Comedy Central's hit shows. The goal of this application was just to give users a fun & simple to interact with their favorite shows on Comedy Central. I even went down to the design of the t-shirts and made a template that I thought would be really cool, and I tried to make them look great enough so that people will actually wear them. The style of the shirt (block image, text outside of it) has been growing somewhat popular lately, and I have a few of them myself.

To be mindful of my length, I will make a bullet list of the features: -User's have the option to select between any random Comedy Central show, or they can choose from a list of the shows. -Once generated, the user can literally buy the t-shirt they generated right on the website. -A new text-box appears after the t-shirt been generated that contains a link to the episode the t-shirt was drawn from (if they want to get distracted from studying.) -If the user is a broke college student (like myself) they might want to hint at other people to buy them a shirt they generated. To solve this, a user can send an SMS message to any phone number (mom/friend/arch nemesis) that gives them a shortened url that links to the t-shirt they generated (& gives them the option to purchase it.) -The web application looks great on mobile (except for one tiny thing - hopefully I fix this in time.) -I didn't get around to it (too much), but there are a lot of opportunities for "easter eggs" in this web application! They would be really interesting & engaging for the users (funny, quirky SMS generated messages/special t-shirts that only generate every so often/etc.)

The target user for this web application is a high school/college student, or really anyone else who watches Comedy Central. It's just a fun little web application that lets you generate t-shirts based on your favorite shows, and its interesting to see which ones come up (even if they don't end up purchasing one.)

(I'm going to be brief about the next few sections, but if you're interested come visit my table & I'll be glad to tell you more!)

The technology that was used in this web application was a LAMP stack, Twitter's Bootstrap, Viacom's API, Twilio's API, Bit-ly's API, and Zazzle's API. Amazon Web Services and Namecheap were also used for the domain name and hosting.

I have a lot of great ideas to improve upon this web application! Amount them are: different t-shirt designs, generating t-shirts from tweets/quotes, and creating mobile app equivalents of them! (even though it looks good on mobile.) 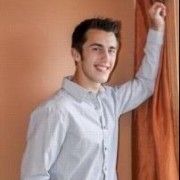