Have you ever wanted to engage in a friendly coding problem challenge? Would you be interested in a time-sensitive, adversarial game as fast-paced as TypeRacer? Enter CodeBattle: Inspired by a constructive rivalry among a small group of engineering students familiar with time-based coding challenges on CodingBat as well as TypeRacer, our group created a a project with the best of both worlds.

CodeBattle is (currently) a one-on-one coding challenge game. After signaling that both users are prepared, a prompt is distributed to each. The objective is to accurately complete the challenge described by a prompt's criteria before one's opponent does. Coding prompts are stored and sorted in our Amazon Web Services back-end which passes random entries when the front-end requests them. Using the text editor CodeMirror, and Judge0's code compilation API, users are able to type and submit code whose output is compared against various test cases. Each player codes as fast as they can until one of them successfully solves the problem.

Tommy is proud of picking up AWS serverless lambdas and implementing a fully working back-end structure. Vincent is proud that he and the team were able to keep pushing through the challenges and not succumb to the tediousness of the project. Riley is proud of completing his first hackathon and learning from/with experienced individuals. He has also acquired an interest in front-end development. Ryan is proud of gaining knowledge of the entire full stack development process, and, like the rest of the team, developing a working app with its core functionality intact.

Tommy learned how to store data in AWS dynamoDB with the use of lambdas. Vincent learned that motivation and hope require the support of practical and useful skills to achieve success. Ryan learned how to delay JavaScript programs and manage the state of multiple users at once. Riley learned that he didn't know as much as he thought and found an understanding of front-end development and the complexity of ReactJS. The entire team gained new skills, such as deciphering software library and API documentation and debugging both front and back-end components. 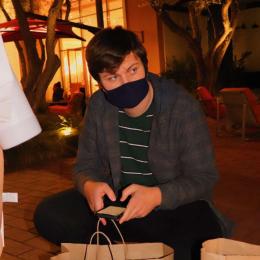