We were inspired by games with asynchronous gameplay, where the experience of one player is vastly different to the experience of the other, and gameplay requires the cooperation and competition between these differing gameplays.

Trapped in a simulation chamber, our protagonist Klenchie is forced to do battle to the death against hordes of simulated gremlins that just won't die! The VR player is thrown into a completely dark environment, with the only light being from their pitiful flaming torch. The evil overlords, who watch over the arena in amusement through their mobile devices, tap into the minds of the gremlins, sending them towards Klenchie.

The experience is built using the Unity engine, connected using UNET over a local network. The main player wears a Vive headset running SteamVR and is attached to an array of Vive trackers, tracking their feet, hands, head, and torso which allows us to perform accurate Inverse Kinematics to calculate the rest of their body position. There are also tracked foam weapons such as a battle-axe and a flaming torch for interaction with the game. The AR players use a mobile device to scan an AR marker using Vuforia to see a virtual world come to life on the marker.

What's next for Clench 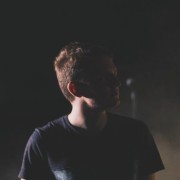