We wanted to do some project that involved a capture the flag experience amongst friends. Further motivation was from using NFC technology to complete this goal

Basically, players will split in two teams and configure at least one NFC tag to be their flag. Players will attempt to tap the other team's NFC tags and then return to one of their tags and tap it to fully capture the enemy flag. When one team captures all of the other team's flags, they win.

We used the Android SDK for the main interface. For the backend, we used Firebase to track all of the flags, players, and games.

Interestingly enough, reading NFC tags was one of the more difficult parts of our project. Another issue we had was certain features of Firebase.

We really are proud of reading from an NFC tag and actually doing something with that data. Other than that, we really liked seeing this whole project come together from the very beginning. Its interesting to see all the different parts of everyone's work finally come into one app.

We learned that we completely underestimate the time it takes to do things. Especially when we are sleep deprived, ha. But we also learned that we can easily tackle interesting tasks to program without knowing how to do it. None of us knew how to work with NFC and the Android SDK when we started.

A ton of stretch goals that we wanted to do but couldn't get around to. We have a lot of other ideas that we would like to implement like time limits and more than two teams. 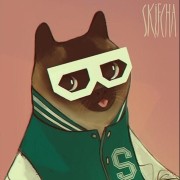