Our team built a satellite tracker that adjusts the direction of an antenna to follow a satellite as it passes over the horizon. This allows for better reception of the downlink of various satellites, such as the International Space Station. We webscraped the Keplerian elements of satellites and used Pyephem to determine the azimuth and elevation of the ISS as it passes overhead. We use an Arduino to control the motors on the antenna which direct the antenna. 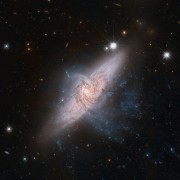