I usually have a reminder or alarm before each of my classes. Sometimes I'm not that far from class, so an alarm 10 minutes before is bound to be ignored. I'll get sidetracked, and next thing I know, I'm late to class.

This app creates geographically based alarms so all you need to enter is a location and what time to be there - we'll take care of the rest.

The Android application was built using Java in Android Studio. The web app and backend was created using HTML, CSS, SASS, PHP, and other tools.

Programming in Android and interacting with hardware is always a beast. I've never done much work with geolocation in Android, and that requires maintaining and managing multiple services and callbacks that adds an extra layer of complexity.

The UI is very clean and there is a consistent interface across the web apps and the UI. The Android application itself is completely functional - not a mockup, and we are proud that we were able to make everything work in 32 hours.

I learned that oftentimes the simplest apps can often be the best.

What's next for BThere

We will soon deploy to the Google Play Store, buy a domain, and deploy the web app on the internet. An iOS version of this application is rumored to be under development. 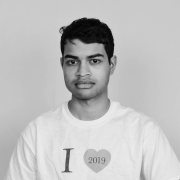