We were tired as we racked our brains for the name of the people we just met - this app would solve that entirely, and may even help us become friends with both the peers and professionals we want to connect with!

BriefMeet is perfect for short encounters at large social and/or networking events - users can take pictures (selfies) with those they meet, and record their names and other information if they wish on the app in respective event categories. The app works on the idea of being able to create that bond of taking a picture with someone - it's a much more memorable experience than a simple handshake and "Nice to meet you," and helps to identify and remember that someone later in the future.

The team first designed the idea and planned out all the features. Then, we put together a backend with mLab and PyMongo as well as Microsoft Azure and Flask, a frontend using Expo and React Native, and connected everything at the end. Developing the login proved to be one of the most time-consuming tasks.

The greatest problem was that we didn't know any of the framework/languages we were working with - Flask, Expo, React Native, Microsoft Azure, GitHub, and PyMongo. Another huge problem was the fact that halfway through, we found out from Expo that an important update for the picture saving feature was not going to come out until two weeks from now, but we made it work.

We were inspired to challenge ourselves. In a weekend, our team members learned 1-2 new languages. It was being able to make something out of the resources that we didn't know anything about - we could have made apps easily out of languages we already knew - Javascript, Python, etc. but decided to go with the challenge and create something from scratch, while learning every single thing along the way.

We have learned that while it may be best to work with what we already know, the case may be that the software we work with isn't always going to work out that way. We all know Python the best, and ended up using that language the least - we ended up working with frameworks we didn't know at all, but learned new skills in the process.

BriefMeet wants to develop into a full-fledged project, and implement more of Microsoft Cognitive Services' facial recognition API to automatically connect users with BriefMeet profiles. We want to allow all people at social and/or networking events to use the power of the selfie to encourage connections, and improve people's memories of each other. We will be waiting on an update with Expo that will be released in about 1-2 weeks to enhance and enable the camera function in BriefMeet. 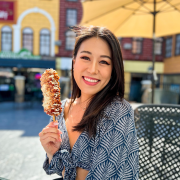