A lot of kids play ROBLOX and I wanted to create a new gaming category for them to play. A child eagerly asked me if I could create a free game that was action-packed for them. I decided ROBLOX would be an ideal place for the creation because I could release the source code to the community and have others play it on their XBox, tablets, or computers.

In addition, I can hardly afford to pay the developer's fee Apple requires. I wanted to show that one person can create a pretty sick game by themselves if the put the effort into it for free.

Plus, I want to open source it when it's completed so the community gets to see how it was done.

Bloxxers is a 3D beat 'em up game where players pit against each other in a 3 minute free for all. Its current version, Alpha, allows you to duel players in a nonstop loop with simple combos, blocks, and on multiple devices.

I used ROBLOX with its APIs and my own API that I like to call Unity. It uses Lua. This version took me a total of approximately 72 hours[real development time] to create.

Unity helps with cutting down development time by allowing itself to extend, shorten code, and grant an interface to easily manage code.

Designing the game to fit ROBLOX's standards, be simplistic, and still retain a Super Smash "feeling" was pretty difficult. I also had to think about the small effects and their implications throughout devices. Objects such as sounds or controls were still difficult to insert into the game as convenience is also a trait players look for in a game.

I also had to think about my own ways to create an orthographic camera and make my scripts flexible enough to optimize at any moment in time. The camera is still slightly an issue with choppiness.

I am very proud of the design of this game and the game's scalability. It's easy to change things around.

I learned about designing, marketing, and debugging. I also learned how to use ROBLOX's development tools and new concepts such as currying and proxy tables. 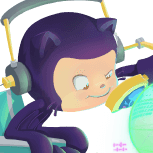