While helping a start-up in Atlanta, I came up with an hack that would replace views in Mobile apps on the fly to some extent. This worked well. But, this same problem exists in almost all Mobile apps that live today.

PROJECT What I am proposing is, adding dynamic nature to Mobile apps. Imagine an app that cuts through waiting times(worse during peek seasons like new platform releases, christmas, etc.) and greets users with completely dynamic views, possibly on each launch! My classic example is, let's say a developer released an app with nice tour images™, and on Christmas eve he/she just wanted to add/update that app tour with Christmas specific message (may be a santa graphic;)). An in about exact one week, he wants to replace that tour completely with Happy New Year type of art work(Santa already delivered gifts ;)). Today, this is not at all possible without releasing new app. And there is a dying need for such dynamic nature from the developer community so far from my research.

Similar problem goes when there is a critical 'One Time Only' app permissions are needed. In olden days, apps used to just show system dialog for various permissions. Let's say 'This apps wants to access your location'. This is one-time shot. Market study(I am glad to share with you if you need to review) shows lot of users REJECT a standard system dialog simply because it lacks clarity and it is kinda invasive approach.

Close to a decade, very few high quality apps started showing purpose-full message dialog before asking user permission with standard system dialog. Again, whatever the developer wrote for the dialog is STATIC. If dev or marketing personnel wants to change that message, may be it's not working, then they have no choice except go for another release and ask customer to download it again! This whole process sucks (dev told me other than me personally experiencing this). This is one more area where server defined assets can help mobile developers or any non-tech personnel to dynamically replace crucial messaging in apps. Think about A/B testing with versions.

To me and to the mobile folks I talked to, this is a pain killer. Not a vitamin :)

MARKET STUDY I have been studying market for few years and there is not even single solution that is out there today! A recently launched product called, apphub, emerged by banking on React Native, but, they completely lack visibility into app functionality and so the analytics. It's dev only interface. It requires current apps to be rewritten! doesn't work. Did I tell you? since they replace binary now they are at the mercy of app store providers. Still since launch they helped 1.2Million apps. So there is a such a dying need!

This also gives us a platform from which a developer can purchase stunning art work from artists around the globe to be included dynamically! Now dev network is beyond their known artist network. It's a marketplace where dev can pay per download type nominal fee to the artist (Dribble + EBay). I will let you think about it's possibilities. No more secret sauce for now...

IDEA TEAM MATES 1) iOS ninja developer who can discuss his/her approach to creating SDK that would call server and dynamically creative views from JSON/XML or whatever we agree as API interface 2) Android ninja, similar to iOS SDK need 3) Backend Server/API builder who can create RESTful/HATEOAS service that would allow a demo dev to define dynamic content on server side, which can be served to Mobile SDKs on the fly.

Myself coming from server/api background, I am thinking to fill backend developer role. If wants to take backend work, I can take Android side. Which ever works best for you!

Others... Since I have spent some time to investigate how-tos, I can share my findings in creating SDKs and API. For iOS checkout MarkupKit-that does majority of SDK work for us. 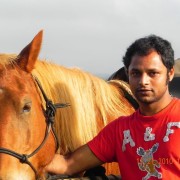 STRETCH GOAL On behalf of a user, publish user app to mobile store from web dashboard with a single click of button...think of WiX for Mobile Apps!!! (Google Playstore might give us edge over others during demo...thoughts?)