ARS is the classic game of snake, but with a twist. It can be played on paper. We built snake as a precursor to more complicated, three dimensional games which could also be played with a paper. We want to take this further. Imagine a puzzle game in which you had a paper, and you used your phone to solve a puzzle hidden in a building virtually erected above it. Another possible path is multiplayer games. ARS became our first step towards these types of games.

When we were brainstorming projects for this hackathon, we decided that we would do an image processing project. We arrived at augmented reality when we began to explore games which change based on physical objects in the vicinity. Neither of us had much experience with image analysis, so we chose to build a simple game with a simple augmented reality. ARS stands for Augmented Reality Snake. It's a step on the way to a new genre of games which will change based on the immediate surroundings.

We used JavaScript and the HTML5 canvas and video tags with the three.js and jsfeat libraries. 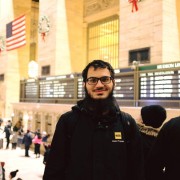