Check for code / video / demo at iHackathon 中美黑客马拉松 Connect to the Future Hackathon.

Traditionaly, we can use Wii, Kinect, Leap Motion or Myo for this kind of task. But as everyone have a smartphone, we figured that we should use smartphone as a motion tracking device. (well, smartphone can be replaced by anything, wearable. things that are prevalent)

So on an Android we gather sensor information (like gyroscope) to calculate the motion, and pass motion with other control signals (like fire, reset) through WLAN to game console. And the game is designed with Unity 3D, and use Oculus/Unity intergration plugins to process the message from smartphone.

From our experiment we find the control experience to be smooth and accurate. Then we extended this control capability to anything that uses cursor, so a virtual mouse using the same logic is created, and we played Shoot Duck. Again, awesome! 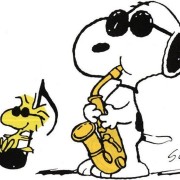