We saw a gap in the market between music applications which allow users to create and share playlists and the DJ and live music industries.

We have tried to combine the best of both worlds by creating an application to allow users to vote on and select the DJs candidate tracks. They are also able to up-or down-vote the current song being played, as well as suggest tracks, which other people also vote on.

Meanwhile, the DJ receives visualised live data through live graphs and charts, showing not just the song votes and participant reactions, but also the amount of movement (i.e. dancing) of the crowd in live-time.

We created an API using the web framework, Django, to integrate a front-end web interface and an Android application with an online database. Live data is passed between these.

Effective workflow using Git branching was difficult, as was effectively coordinating tasks between a team of five. Some problems were also posed by different Android versions.

The final product and its excellent features and quality are the things we are most proud of.

What's next for Alpaca 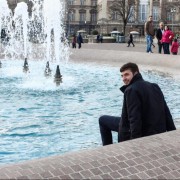