Do you remember when you were a kid playing with paper airplanes? Remember the time when you imagined this plane flying over mountains and all over the world? This hack is a throw back to our childhoods-times when imagination reigned supreme. Use your mobile phone to control your airplane like you never could before.

In this game a user can control a Unity flying game on their computer using their phone and control it in an intuitive way.

We used a socket.io server to communicate between between a phone and game client which sends accelerometer data from the phone client to the server and onwards to the game client. We chose to host our server on Linode. To make our game client we used Unity 5 and a socket.io library.

There is not that many good libraries that support web server and Unity integration. For example, we were using Firebase before to host the web server and we are able to get it to retrieve mobile phones' rotational information whenever a user visit the website. But since Firebase and Unity integration is buggy, we ended up using Socket.io which was also difficult to use since there are not that many open source libraries for it. This project really forced us to research a lot on what frameworks to use, and how to make them all work with each other.

That through all of our technical difficulties this weekend we persevered and make a working product.

Making a 3D environment in Unity, writing a Socket.IO server, and using Socket.IO in JS just to make a few.

Multiplayer support! Host a server where a lot of airplanes can enter at once, and some VR experience too! 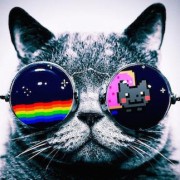