At our first BoilerMake in October 2014, there was a dearth of Halloween-themed hacks. We aimed to change that this year and add some pumpkin spice to the usual hardware hacks (pun intended).

When you tap the jack-o-lantern, it snaps your picture, adds some festive stickers and a witty caption, and tweets it via @PumpkinPiPics.

We used a Raspberry Pi with a camera module to implement the camera. It uses a capacitive touch sensor breakout board to detect when someone taps the pumpkin. Then it captures the image data, applies a random sticker and chooses a random caption, and uploads it to Twitter.

We initially planned it to be entirely wireless, using batteries for power and WiFi for tweeting. However, we discovered that the batteries only lasted a few minutes per charge and that WiFi doesn't perform well inside water-based organisms like pumpkins. There probably won't be an Internet-of-Pumpkins anytime soon.

We also didn't expect to have so many issues with debugging the capacitive touch sensor. After many grueling hours of debugging, we discovered that we couldn't use AC-DC wall adapters, only fully DC power supplies (like a laptop), because otherwise the sensor would read too much noise. 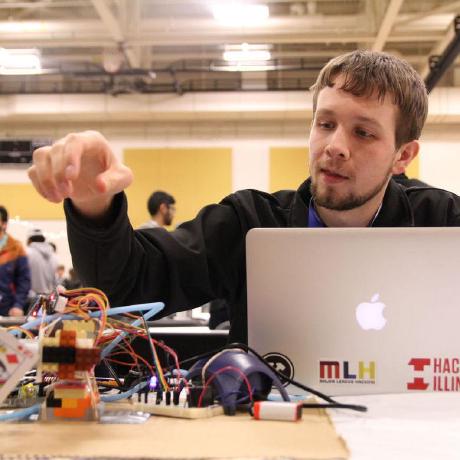