Please enter for: Best Company Team, Technical Achievement (if that one exists)

Inspiration: We've all seen War of the Worlds & Independence Day...but what happens when the aliens succeed and the humans are dead? Join us on a journey into the mind of a bored, alien conquistador. You've invaded, you've found no resistance, you've killed all the humans...what will you do now?

What it does: The Humans Are Dead is an open world sandbox set in a world conquered by aliens. Playing as an alien, you entertain yourself by burning the world, messing with the local fauna, and terraforming to your hearts desire. Work together (or against) your fellow alien players to build the world in your own image, or just find amusement through blowing up pigs.

The game is a 5000km^2 world with roaming wildlife, cityscapes and farms. It will support (at a healthy guesstimate) 250 players, running across approximately 50 instances of Unity running in the cloud.

How I built it: The Humans Are Dead is built with Unity and SpatialOS, using C# and Scala. Suffering a chronic lack of artistic talent, we have made use of the Unity Asset Store for some art (but definitely not the flappy sausage tentacles).

Challenges I ran into: Morrison couldn't open Unity for 4 hours. We lack artists.

What I learned: How to use Unity. :D

What's next for The Humans Are Dead: This is actually pretty close to a demo we've been wanting to build internally for a while, so hopefully it shall live on and be developed as a demonstration project 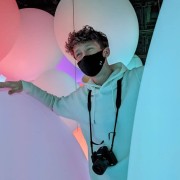