After watching the presentation by Kristen Facciol we were inspired by the Canada Arm and Dextre and wanted to build an improved control for intuitive interaction with the arm.

Using a leap motion sensor it reads a user's hand position, arm angle, and whether or not the hand is open or closed to control the robot arm.

The body of the robot was made of Acrylic and laser cut. It used 5 servo motors. We then gathered positional data from the leap motion to know where the hand was in space. Then using inverse kinematics and the geometry of the robot arm the correct angles were sent to an Arduino via a serial connection from a laptop that had the leap motion information.

There were several hardware issues where different issues appeared on different laptops.

We are proud that despite the headaches that were caused by hardware we persevered by working through the night and managed to debug our issues.

RoboArm can now be part of the next space exploring rover and be used to do a wide variety of tasks since it can be controlled by a human. 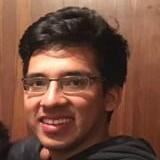