GreatDJ was originally about searching Youtube and creating playlists on the fly that play automatically. Lately, though, it has grown a bit:

In order to run it locally you'll need to: 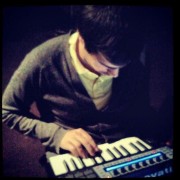