Entering our first Hackathon, Tom and I paired up thinking we were going to do a Ruby on Rails project that interacted with one of the HackPSU APIs. I was personally invested in using the Capital One API because I am going to start working for them after graduation. To my dismay, Capital One didn't have a Ruby import to interface with Rails the way it does with languages like Python, Javascript on Node, jQuery, Go, and Swift.

I voiced my dismay, maybe a little too audibly, and a friend nearby spat back, "Why don't you write one then?" I laughed at first. I've never used an API before, let alone develop a wrapper to interface with one. Tom and I didn't know where to begin, but this is a learning hackathon, and if we could pull it off, we could open the doors for Ruby developers to utilize Capital One's API more easily in the future.

Tom got to work learning the API and what he needed to do to convert the existing documentation into Ruby. I spent a large portion of my time learning how RubyGems were created and even made a few test gems of my own. The idea was really to just mash the two parts together when we were both ready.

And we did. It took a little bit of configuring, but we made it work. We were able to make method calls to Capital One's API in Ruby's irb. With a simple RubyGem import, developers will be able to access Capital One's API for any Ruby project. We hope you enjoy the capital_one gem! 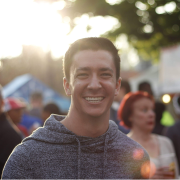