I'm not one for ripoffs though, so I decided to have some fun with it. Instead of a Flappy Bird, it's actually a very Flappy friend of mine named Herman. He flies through the monoliths in Oslo, trying to reach infinity, all while looking smacking as a bird (a Flappy one).

This is no regular game though, as it is almost 100% made using UIImageViews and Storyboard. Now that's different!

(Just in case you didn't get it, this game is a complete joke. It exists, yes, but it was made in under an hour for fun just to cheer him up) 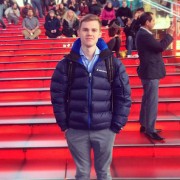